Probably the biggest up-front decision for starting an appreneur business is deciding on what type of app to build first. When I built my last software company, I found that I needed software to track requirements, bugs, test cases, and project deliverables. At the time, very few software products did this in one tool. Sure, you could buy several tools to accomplish this but they were not tightly integrated and were pretty disparate. That triggered the idea for the product — I would create a web-based product that did all of those things and could be rented (SaaS) instead of purchased. Since I was a major client of my own software, it made all the difference as to how we continued to improve it.

Trust your instincts, and make judgements on what your heart tells you. The heart will not betray you. ― David Gemmell, Fall of Kings

Be the Customer of Your App

Keeping with my past successes, I decided I should create an app that I desperately needed and would use on a daily basis. In other words, I should build an app that I would actually be a customer of. I came up with the idea of becoming an appreneur in January 2013 and at the time, my wife and I were traveling a lot and needed a way of tracking hotel loyalty cards on my phone. That way when we went to a Holiday Inn or some other hotel, I could quickly give them my loyalty card account number and they would give us credit for the stay.

At the time, I was using a Windows program for keeping track of passwords for the different websites I use, my loyalty card account numbers, and just about anything else I needed quick access to. The Windows version worked great when I was sitting at my PC but it was not accessible when I only had my phone in my pocket.

This spurred the idea for my app. I will create an app that allows me to track passwords, loyalty card accounts, credit card accounts, and the other hundreds of things that are hard to remember yet important to track.

Does this App Exist Today?

The next thing to do was to determine if there is already an app that does what I need. After doing a few Google searches, I found that this app does exist and in fact, there are a number of competitors already doing it. Many people would stop there — it has already been done, someone beat me to the punch. But this tells me that there is already an established market, so there must be lots of people like me that need an app like this. I will not be deterred by the fact that competition already exists, I just need to find some competitive advantages that will allow me to compete well.

I personally believe that trying to create a totally unique app is much harder because you don’t have an established category or market to pull data from. It is a crapshoot as to whether the idea will be marketable. So creating a competitive app is not a bad thing.

Sizing Up the Competition

After doing multiple Google searches, it was clear that about 6 companies were capturing most of the market. Looking at iTunes, I found that there were another 15 or so companies with competitive apps but very few seemed to be selling much. How did I know that? I used http://xyo.net to determine how many mobile downloads each of the big 6 competitors were getting per month.

Note: http://xyo.net provided free analysis of app downloads when I first did this research. They have recently sold that business to https://prioridata.com and it appears that they charge for researching this data now.

It was easy to estimate the amount of revenue each of the 6 companies were making because I knew how much each app was selling for and XYO told me how many monthly downloads they were getting.  Here were the results (I won’t use the competitor names since that is confidential to my analysis):

Based on this initial research, this app idea seems promising. Even if I could generate half of the revenue that the 6th competitor generates, it still meets my goal of creating an app that can produce revenue of $50,000+ per year. And if it is able to do even better, I may have a lucrative app on my hands. But to be competitive, I know I will need some competitive features that allow my app to shine over some of the others. That will be the next analysis — understanding the things each of the competitors do well and not so well so that I can capitalize on it.

This is the early stage of business plan development, I will continue upon this theme in upcoming blogs so you can see how I developed the business plan.

The app I am creating is slated for production in the App Store around July or August 2014. However, the web edition is already available at http://www.aMemoryJog.com. Once the app is done, it will seamlessly sync with the web version. Download a free trial and check it out! 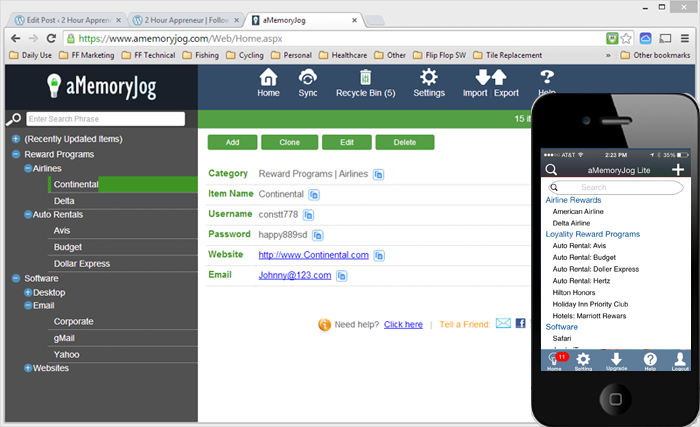 If you have an entrepreneurial spirit and want to take a journey with me, we will discover if it is possible to build a mobile app business by working as little as 2 hours a day.  I have read several books that suggest that it is possible, if done right.  So I am on a quest to see if that’s doable and I will share what I learn with the readers of this blog. I will discuss everything I do along the way so that if it is possible, you will have a guide to follow as you attempt the same.

My name is Steve Miller and I am an entrepreneur. After graduating from the University of Alabama in 1984, I wanted to learn as much as I could in hopes of eventually starting my own business and retiring early — hopefully on or before I turned 50. Initially I worked at large software companies, soaking up as much knowledge as I could about software architecture, software engineering, corporate finances, management, and leadership. In 1999, I started my own software business and sold it in 2009 to a larger acquiring company. That allowed me to achieve my goal of retiring early, at 50 years old.

I have been retired now for 1.5 years and have been enjoying this time traveling the globe with my wife, spending time close to our kid’s college towns, golfing, biking, fishing, boating, and exploring new hobbies. You can learn more about me at http://www.WeBeTripping.com and follow our travel blog at http://webetripping.wordpress.com.

Why Start Another Business?

So if I am financially independent, travel a lot, and have lots of hobbies, why start another business? There are several reasons:

What are the Parameters of the Business?

I chose to create mobile apps (iPhone, Android, etc.) because there is a low-cost entry, the market is fairly new and from what I read, it can be lucrative if done right. Sure, there are millions of apps on the market but the majority of apps only get a couple thousand downloads during their lifetime. A smaller portion of apps can generate between $50,000 to $500,000 per year, and an even smaller number of apps can generate millions per year (think Angry Birds, Words with Friends, etc).

When I started to build my business plan, I wrote down these goals of the business:

What is an Appreneur and What is the Blog About?

An appreneur is simply an entrepreneur that specializes in building mobile apps. I will use this blog to document all the things I do as I build the business. That will include how I choose the type of mobile app to develop, how to research competitors, how to build a business plan, how to develop app specifications, how to choose a sub-contractor to build the app, how to market the app (pre-release and post-release), and how to analyze and tweak business results.

Will it work? Can I really build an app business working less 2 hours or less a day (on average)? Honestly, I am not sure. But I will document the process and we can determine if it will work. I will be transparent, talk about successes and failures so that you can learn from any mistakes (that I am sure to) make.

I plan to post a blog several times a month, probably less once the app is in production. If you want to get an email each time I post a blog, go to http://2hourappreneur.wordpress.com and scroll to the bottom right of the screen and enter your email address.  You can unsubscribe at any time.

Join over 24,000 followers and get new blog posts in your inbox:

Disclaimers: I'm an affiliate for some products on this site but I only recommend kick-ass products. My financial articles are for informational purposes. Before investing, do your research or seek professional advice. Eat your veggies -- they're good for you.